The patient, a 28 year old man, came to me because of mononucleosis, which began three weeks ago. He had a fever of about 38°C and enlarged tonsils. The antibiotics did not work and he was finally diagnosed with mononucleosis. Every morning, he wakes up sweaty and very tired; his tonsils are swollen, alternating between left and right, starting with the right.

He had been looking forward to summer for two years – he wanted to enjoy it because he has just finished his studies. Now, instead of that, he has to be on a diet; he cannot eat French fries and crisps and he must not exercise or play sports.

He had a weak stomach as a child; he had stomach aches when he was tired or hungry, and would vomit constantly. These problems stopped when he was fourteen. He no longer suffers from the vomiting but still has stomach ache; a dull pain. He must eat regularly and alcohol makes him sick. Occasionally, he has a stabbing pain in the left side under his ribs; the pain does not spread anywhere.

He has often been sick since he was eighteen. His throat hurts on both sides, worse when swallowing. The illness appears several times a year and he takes antibiotics at least once a year.

He coughs while talking about himself. He is an only child and lives with his parents in a duplex in his own flat. He talks about himself as a party guy. He has irregular sleep, often going to sleep around 4am. For the last two years, he studied beside his work. His family is very financially secure and he wants to maintain this standard.

He says: “The only possible way in life is being somewhere above average.”

Pavlína Hollá (PH): What's the most important thing in your life?

Patient (P): I'm a sociable person. I enjoy being with my girlfriend and my family. I like my car and I enjoy speeding. I'm probably the fastest driver in the city. I like travelling, doesn't matter where. I have travelled through North America and Europe. I like it when things have their system and a clear structure, but at the same time I'm flexible. When things matter to me, I'm uncompromising.

I broke up with my ex-girlfriend because she wanted to get married in church. I don't care where I get married, but I'm strictly against promising somebody to raise my kids in some particular religion. I'm used to keeping my promises. If I don't like something, I say so. I find this a big interference with my private life.

PH: How is your job?

P: I work flexible hours; I have an office at home. If I had a different job, I would feel imprisoned rather than being at work. I like making free choices.

His boss treats him more as a partner than an employee. He can make his own decisions. He always fulfils the tasks he gets. It's important for him to be flexible and make his own choices.

He really hated it when his own litter bin was taken away and he had to use the common one. He instantly requested to get one of his own. “I have to have things the way I want.”

PH: What are you scared of?

P: I'm scared of poverty. I never experienced it, and maybe that's the reason, but I think that I could get out of it if I was endangered by it.

I'm extremely scared of pain. Once, I had a birthmark on my head removed; the anaesthetic didn't work and I had an allergic reaction to it.

I'm also very scared of the unknown and doctors. It's the feeling of having to rely on somebody I don't trust.

P: I'm detached. I always try to see things from a larger perspective. My vision of myself is that I'm invincible. When I make some decision at work, I stand by it even though it's not the perfect decision. My reputation always helps me.

On the short term, I can do a great performance but I'm not a long distance runner. I had a conflict with a colleague of mine once and it exhausted me. It was about gaining supremacy. In the end, I decided that there's no meaning to it and I decided to leave; I found a different position.

PH: What do you want to achieve in your life?

P: My dream is to be financially free. I want good health for myself and my family, wife, kids and the extended family. When I die, I want it to happen during my sleep.

PH: Do you have any problems with your eyes?

P: Yes, I have been short-sighted since I was ten. My sight has stabilised since I started driving a car.

P: I like everything sweet and unhealthy. I have a big appetite, I eat a lot and I'm still slim. My girlfriend says that I eat but she puts on the weight. I don't like garlic, it lowers my blood pressure. I don't like butter.

The patient's father has digestive problems, his grandfather has stomach ulcers. His mother and grandmother had leukaemia.

He is warm-blooded. He has been feeling very warm since he got mononucleosis. 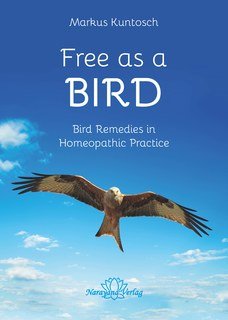 The patient's need for freedom and liberty reminds us of the Lanthanides, but we also see a strong urge to travel, the love of speed, detachment, and perfectionism. Family is very important for him. He is very principled and proud, and he is ready to fight for his position. All these are themes of birds.

On the physical level, we can see a fast metabolism, throat problems, digestive problems, and eye problems.

Prescription: because of the feeling of imprisonment if he does not feel free, his ability to see things from a larger perspective, and his love of fast driving, I chose Haliaeetus leucocephalus 200C, single dose.

After two weeks: the night after the remedy he sweated a lot, but in the following days the excessive perspiration diminished. “I feel quite good, although I still feel a bit weak. I don't sweat so much anymore and my tonsils are smaller. The liver function tests were perfectly fine and according to the doctor, I'm completely cured from mononucleosis.”

After a month: he feels very good; he has got his strength back and he can do physical labour. The stabbing pain in his left side is mostly gone, though it appears now and then on the right side when he is stressed and does not have things under control. He had relationship problems with his girlfriend and was scared that she would leave him. He is still worried about the future. He likes his current job but he needs more money. He would like to have his own family.

After six months: he came because he still feels a bit weak. He used to be a night owl, sleeping 6 – 7 hours a night, now he has to sleep at least 8 hours. In the morning, he wakes up refreshed and during the day, he works without any problem: he is only tired in the evening. He falls asleep quickly and in his opinion also early. Not long ago, he went skiing. He would ski the whole day without a problem, like before the illness. He did not feel that his stamina was low.

The stabbing pain is completely gone, he has no digestive problems anymore and can eat anything. This winter was the first winter he did not get ill. Even his girlfriend got ill but he remained healthy. The repeated liver function tests turned out fine. He found a new job.